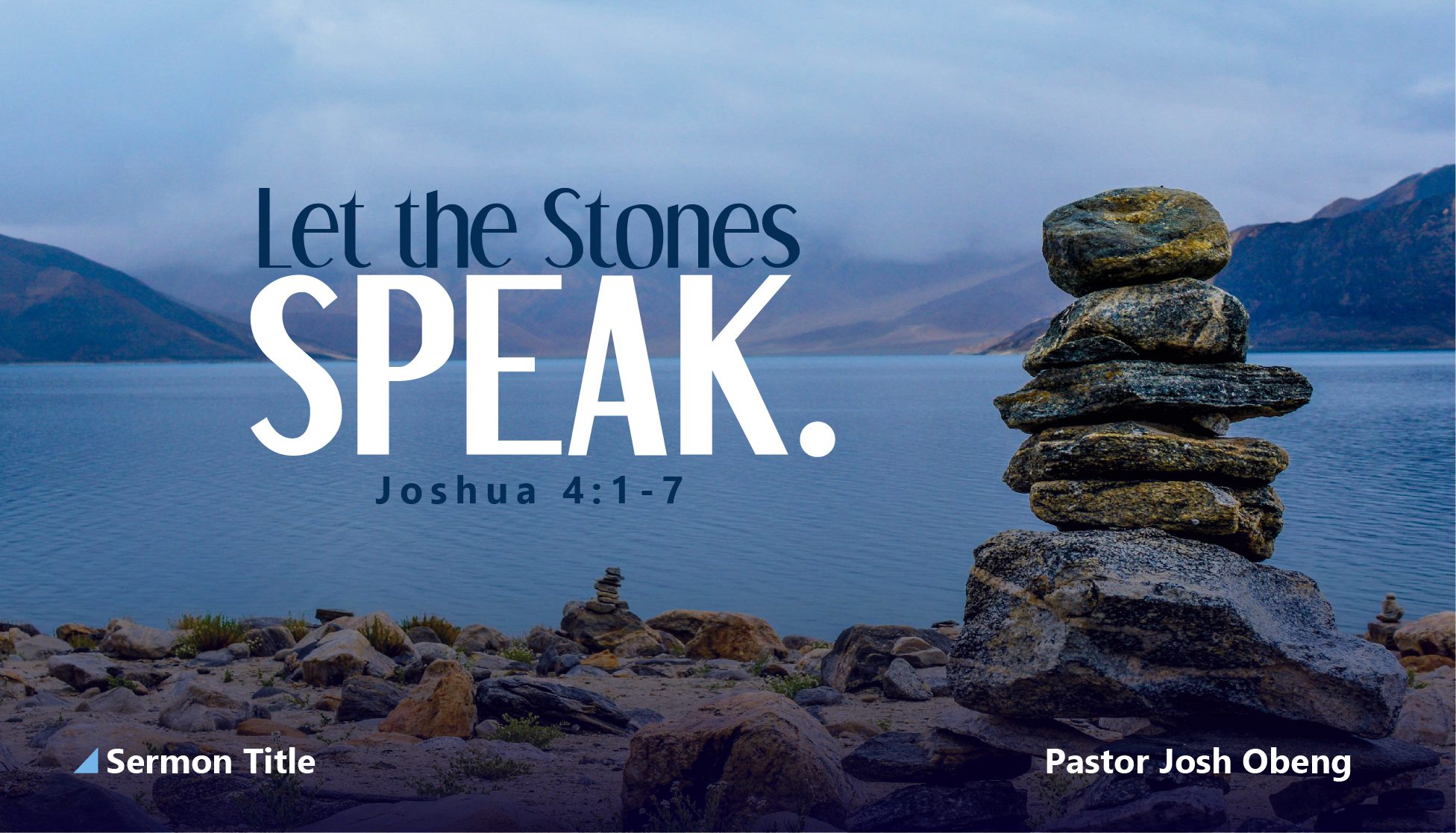 LET THE STONES SPEAK
Bible Text :
Joshua 4:1-7
4 When all the nation had finished passing over the Jordan, the Lord said to Joshua,
2 “Take twelve men from the people, from each tribe a man,
3 and command them, saying, ‘Take twelve stones from here out of the midst of the Jordan, from the very place where the priests’ feet stood firmly, and bring them over with you and lay them down in the place where you lodge tonight.’”
4 Then Joshua called the twelve men from the people of Israel, whom he had appointed, a man from each tribe.
5 And Joshua said to them, “Pass on before the ark of the Lord your God into the midst of the Jordan, and take up each of you a stone upon his shoulder, according to the number of the tribes of the people of Israel, 6 that this may be a sign among you. When your children ask in time to come, ‘What do those stones mean to you?’
7 then you shall tell them that the waters of the Jordan were cut off before the ark of the covenant of the Lord. When it passed over the Jordan, the waters of the Jordan were cut off. So these stones shall be to the people of Israel a memorial forever.”

i.   There are over 100 verses that admonish us to remember because human beings have a propensity to forget.
Deuteronomy 6:12
Then take care lest you forget the Lord, who brought you out of the land of Egypt, out of the house of slavery.
Psalm 77:11
I will remember the deeds of the Lord; yes, I will remember your wonders of old.

Note: God asked them to pick stones of remembrance for the following reasons:

As a reminder that God is the source of the blessing in their life.
Philippians 4:19
19 And my God will supply every need of yours according to his riches in glory in Christ Jesus.
James 1:5

5 If any of you lacks wisdom, let him ask God, who gives generously to all without reproach, and it will be given him.

2.   As a reminder to the next generation so that the relationship they had with God can be transferred.
Psalm 78:5-8

He established a testimony in Jacob and appointed a law in Israel,
which he commanded our fathers to teach to their children,
6 that the next generation might know them, the children yet unborn, and arise and tell them to their children,
7     so that they should set their hope in God and not forget the works of God, but keep his commandments;
8 and that they should not be like their fathers, a stubborn and rebellious generation, a generation whose heart was not steadfast,
whose spirit was not faithful to God.
Genesis 18:19
19 For I have chosen him, that he may command his children and his household after him to keep the way of the Lord by doing righteousness and justice, so that the Lord may bring to Abraham what he has promised him.”

3.   The stones served as a testimony against the enemy.
Revelation 12:11
11 And they have conquered him by the blood of the Lamb and by the word of their testimony, for they loved not their lives even unto death

34 But David said to Saul, “Your servant used to keep sheep for his father. And when there came a lion, or a bear, and took a lamb from the flock,

36 Your servant has struck down both lions and bears, and this uncircumcised Philistine shall be like one of them, for he has defied the armies of the living God.”

6 “For I the Lord do not change; therefore you, O children of Jacob, are not consumed.

« THE INCARNATION – THE DAY GOD BECAME MAN STANDING TOGETHER »